Let’s show the world what an NFT can do. One application to take on real-world violence. One initiative to onboard and support verified women-led projects advancing real solutions to benefit their projects and our community. A children's book series on women's history in STEM. An endowment to fund women and non-binary web3 developers. Real women. Real solutions. Real impact. Real sustainability.

We are building a community of enthusiastic, driven, and innovative problem solvers working together towards resolving common problems that impact us all.We have precise goals in our approach. We believe that without precise goals, it becomes impossible to effectively change our world. Our precision brings our task into focus.Goal #1
Studies show that women, particularly young women, and college-aged people, are the most reliant on public transportation in large metro areas, between 60 - 90% will face sexual assault or harassment while on public transport.
We designed the framework to develop a mobile app to help the targets avoid these attacks, find support, and build security into their daily public interactions.Goal #2
Our project will bring more diversity into tech and strengthen the industry by funding the next generation of female and non-binary programmers and developers through our Next Warrior Scholarship.Goal #3
Giving back early and often has been our aim. Prior to our mint we have used our WomenOn.Earth site as a platform to assist projects like ours by linking forces as we navigate the NFT landscape.
In phase two, WomenOn.Earth will become our portal to link our DGC community with the continuous waves of women-led, solution focused projects attracted to NFTs for startup capital. This incubation hub will fast-track projects helping them avoid the hurdles a start-up faces. By using “Build Your Change” and “Mint A Mentor” we will assure economic success for the inexperienced founders and our community holders. Goal #4
Sustaining our community and the value of our brand, our various collections, DVW branded merchandise, and Women’s History Children’s book series, sold through our Market place with profits invested to grow and support the community.Our Vision Document is a deep look into our project, covering the origin of our plan, artistic decision-making, founder bios and future artistic and project goals. Our Whitepaper provides a financial overview of our assumed expenditures and revenue projections based on analysis from our advisory panel. 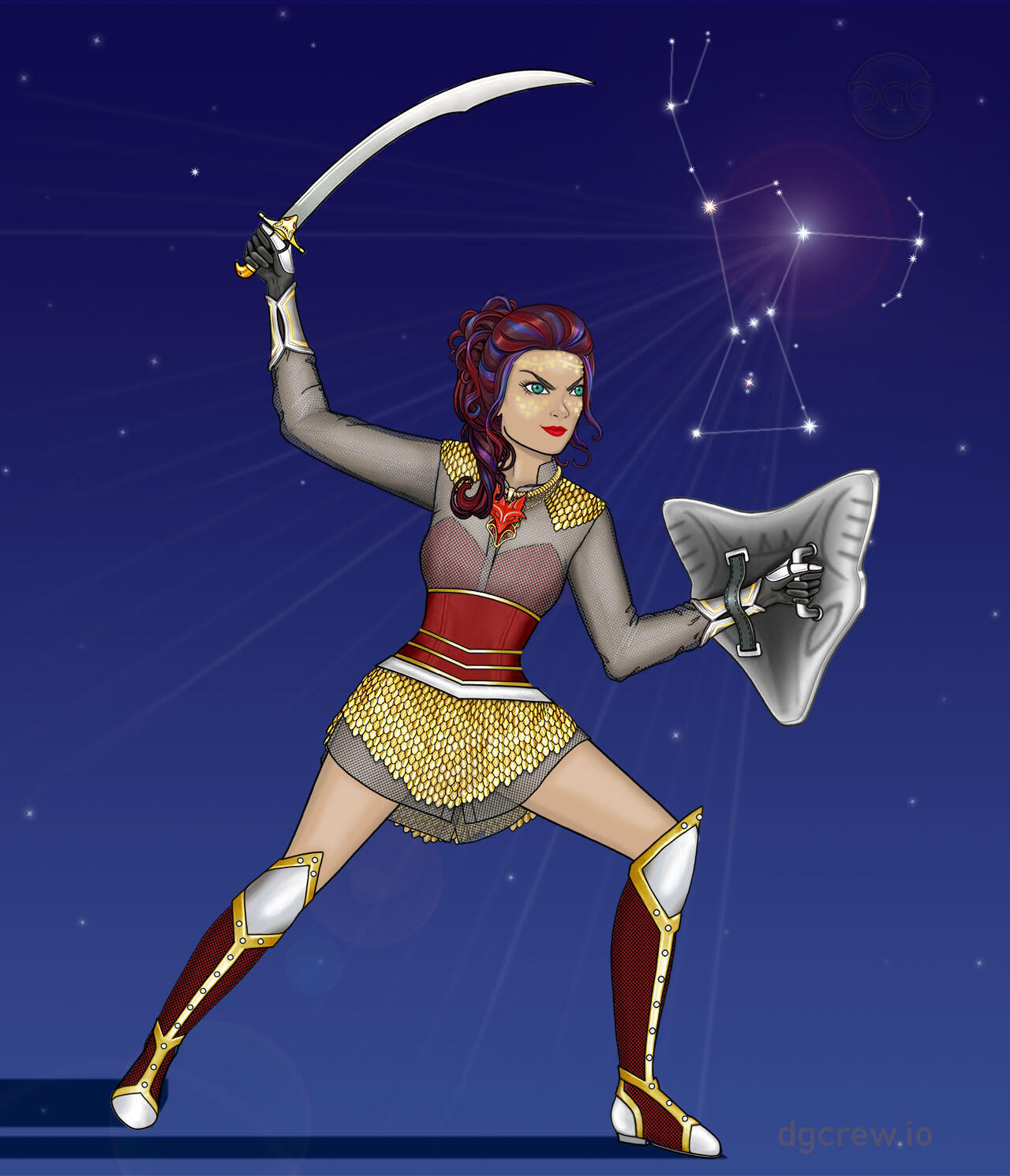 Diva – Goddess (Latin),
Vixen – Fox (Old English), and
Warrior – to make for war (Old French).Our 10k collection, DivaVixenWarrior tells the story of confident warrior women, defending themselves from the struggles in the world.

Suspended in the sky amongst the stars, Bellatrix waited. The “Female Warrior", seen as Orion the Hunter’s shoulder. Fragmented by battle 3600 years ago, a chunk of her tumbled to Earth. Smashing into the soil of North Africa, the night sky hardly took notice of the fallen stardust, but Earth certainly did.Delivered from the stars, she waited till she saw that Egypt was most in need. Ahhotep I, formed from the star’s dust, arrived to rescue Egypt and secure its safety. Throughout history, the lady warrior re-appeared. She took on other forms and along the way, a legion of ferocious sister warriors were gathered. Complete fighting divas such as, Lady Fu Hao, Vishpala, Shammuramat, Queen Tomyris, Cynane, Queen Stratonice, Amanirenas, Veleda, Zenobia, Princess Sela, Amina, Idia, Tarabai, Mah Laqa Bai, Sacagawea, Carlota, Pankhurst, Lovelace, Wells, Till, and Ginsburg.Today these warriors move amongst us, in the metaverse they have chosen their next great confrontation, the fight to improve our lives. DivaVixenWarriors, the embodiment of history's fiercest fighters.The DivaVixenWarriors are the first phase of Devastating Girl Crew’s journey to change. Successful battles demand allies. Be an ally, be a DivaVixenWarrior. 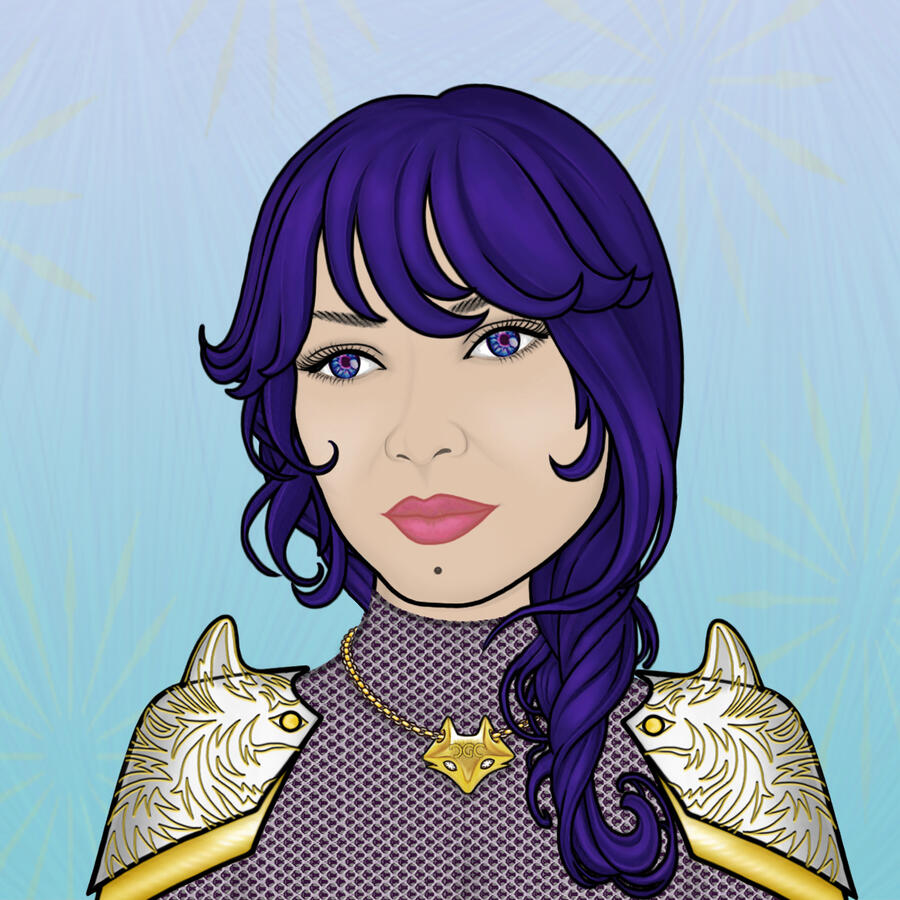 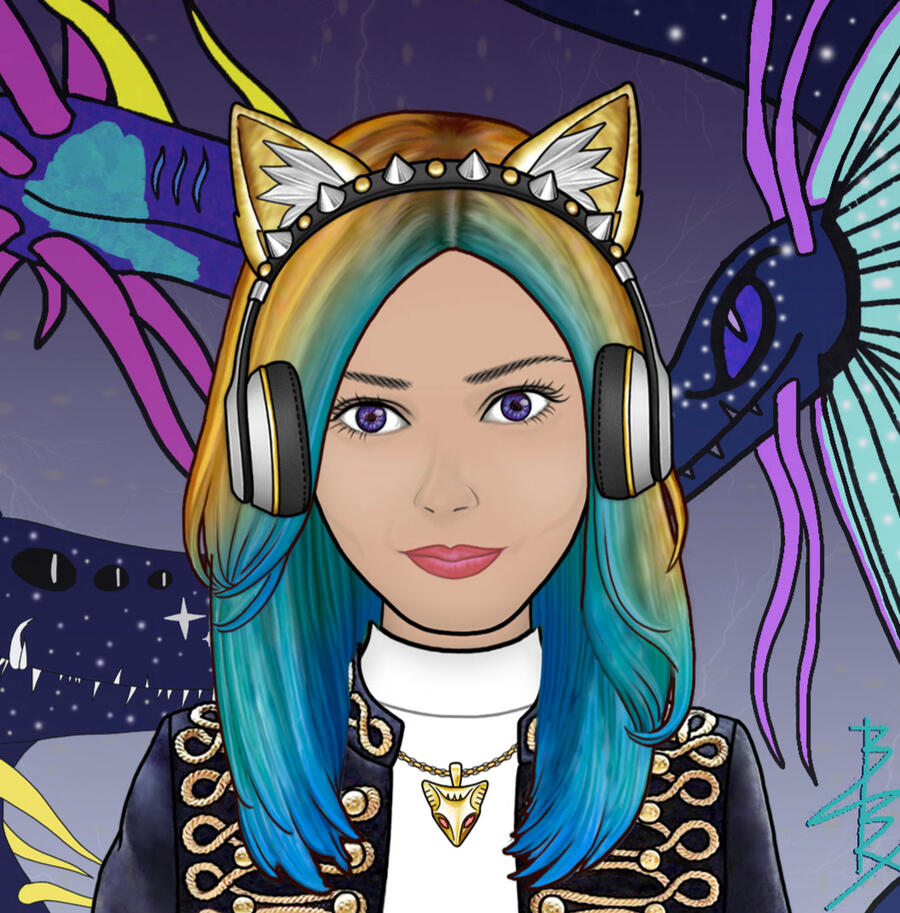 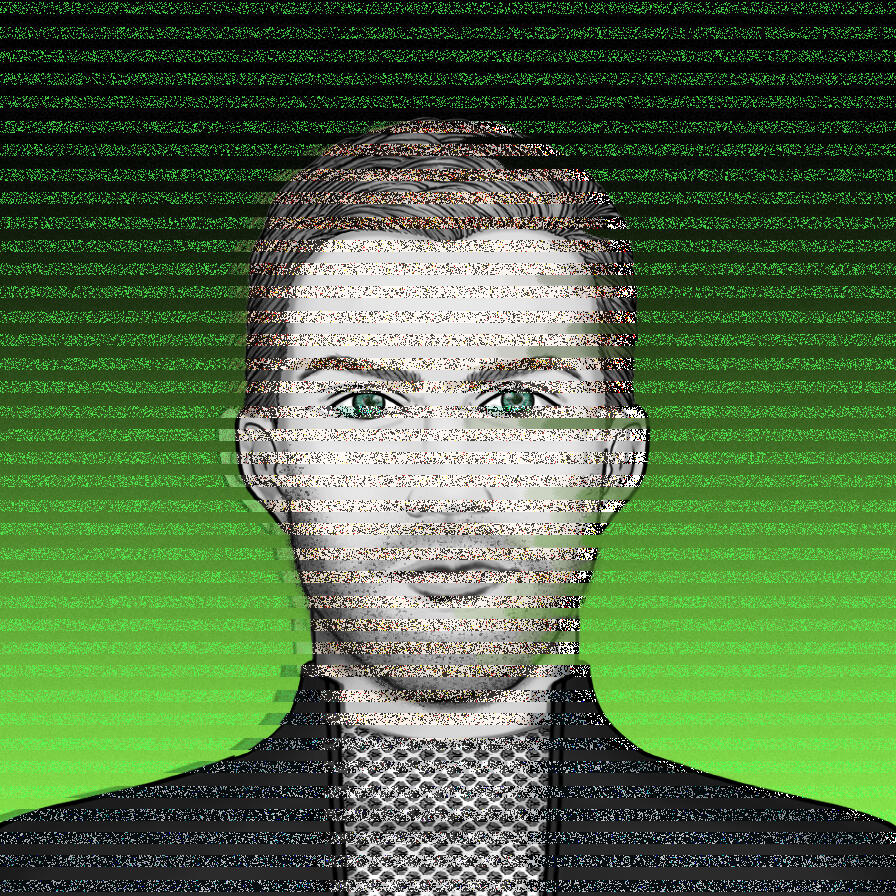 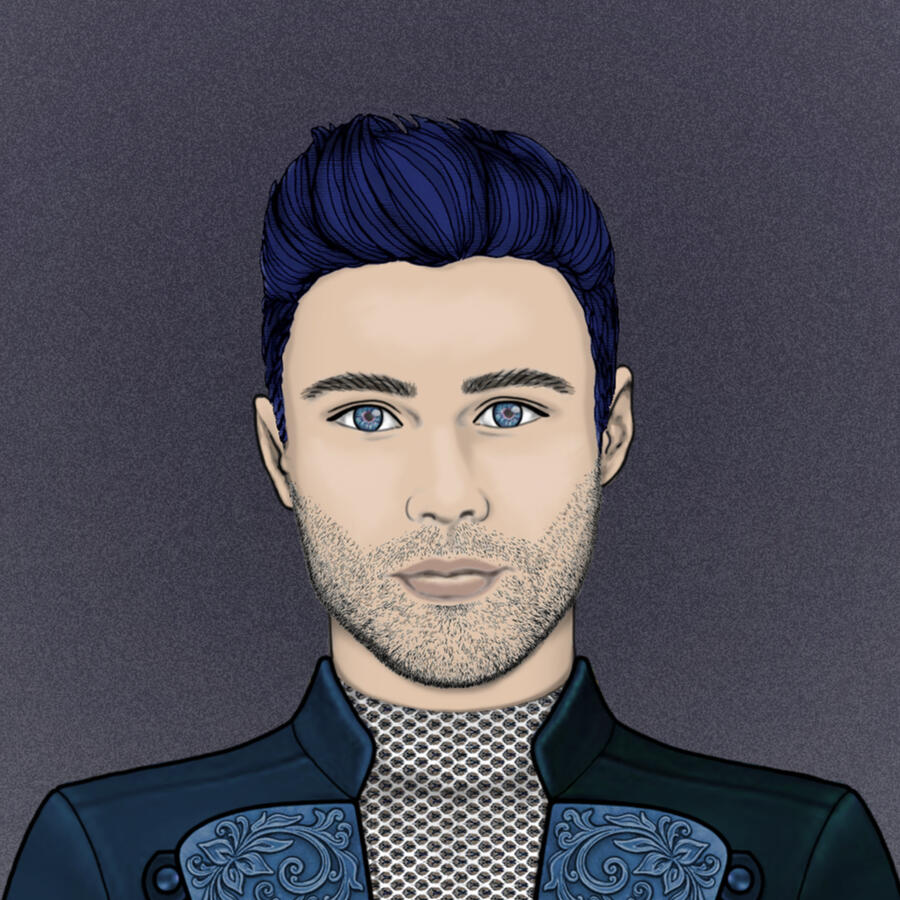 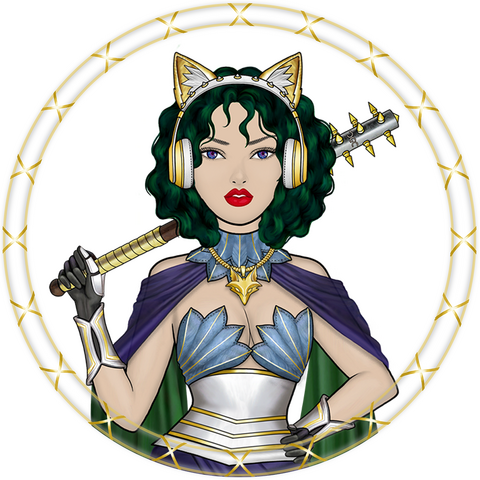 We started with two overlapping problems, bias, and violence.Everyday more bias is being embedded into all parts of society through poorly designed AI. Why is it happening and why does it matter? Not enough voices in the design room to speak for the marginalized creates poor strategies, coupled with AI requiring quality data to create the brain it must have to deliver accurate outcomes. Bad design, bad data, bad AI outcomes. This leads to costly financial consequences for women. This leads to racist judgments at bail hearings. This leads to missed employment opportunities. This leads to lethal medical outcomes. This leads to deadly design flaws in products and public policy. Lives are lost, futures are broken, bank accounts are busted.While machines are harming us behind fiber optic lines hidden on large server farms, society continues to see women as objects to inflict abuse upon. Far too many women walking earth are carrying the emotional and physical scars of abuse. Women across the world face different challenges to get through each day. But every woman experiences the feeling of being exposed and in peril when maneuvering through heavily male dominated spaces. We will change that and alter lives. The NFT community is an untapped source of innovators who will lead the fight and bring security to those who have lived feeling insecure. Join us and make a difference.

Applying for a home loan, student loan, line of credit, or business funding? Anytime you fill out an application for access to finance, an algorithm is rating your value. This is problematic as a woman’s independent access to credit has only been available for the past few decades.
Need a job or a career change? An algorithm is filtering your resume and determining what positions it thinks you best fit, based on what it understands about the history of people employed in that field, hence male dominated fields stay male dominated as the algorithm has learned from these skewed datapoints.
Doctors and pharmacists are trained with textbooks written by men, using science mostly conducted by men on men. The auto crash data was recorded on the outcomes of men in accidents. Men are assumed to be the primary purchasers of cars.
If the AI developing teams more diverse, with experiences and bodies, and histories that slightly varied, the AI may been created to take into account that the datasets being used to teach were going to be flawed. Yet, when well-intentioned work, meets limited variations, that “dirty data” becomes a force determining far too much of our lives.

Non-fungible token. This a unique art piece, digitally signed by the artist. No piece will be the same, and the collection is limited to just those created the first time. You will be able to keep it forever, or collect it with others, sell it or trade it, but while you own this signed copy, it will unlock benefits exclusive to just this community (discussed in Benefits section) for those who possess the signed copies.

New to this? That’s great, everyone has a first time. Let’s get through this.Download the metamask.io extension for your browser, or the mobile app. This allows you to make purchases with Ethereum. Using the browser extension or the Metamask App Browser on mobile, you can then purchase Ethereum, through the Metamask Wallet using Wyre or Send Ethereum from a crypto currency exchange, like Coinbase. You will click Connect on the tab on this page or on the main page of this site and connect your Metamask. Once completed you be able to purchase the NFT in the mint section. You will be asked to sign your transaction. Once your purchase is complete, your Warrior will be viewable in your wallet and on OpenSea.

OK, I am in, when is the launch and sale?

Summer, we have yet to lock the date, but the Warriors will arrive just as warmth of summer floods the outdoors with late-summer nights. We will update this space, our Twitter, and Discord with the finalized date shortly.

What is the mint price and is there an allowlist?

The Pre-sale and Mint Price will be announced as we near the mint this summer.
Details on the allowlist can be found in the DGCrew Discord in the channel, #-Allowlist. 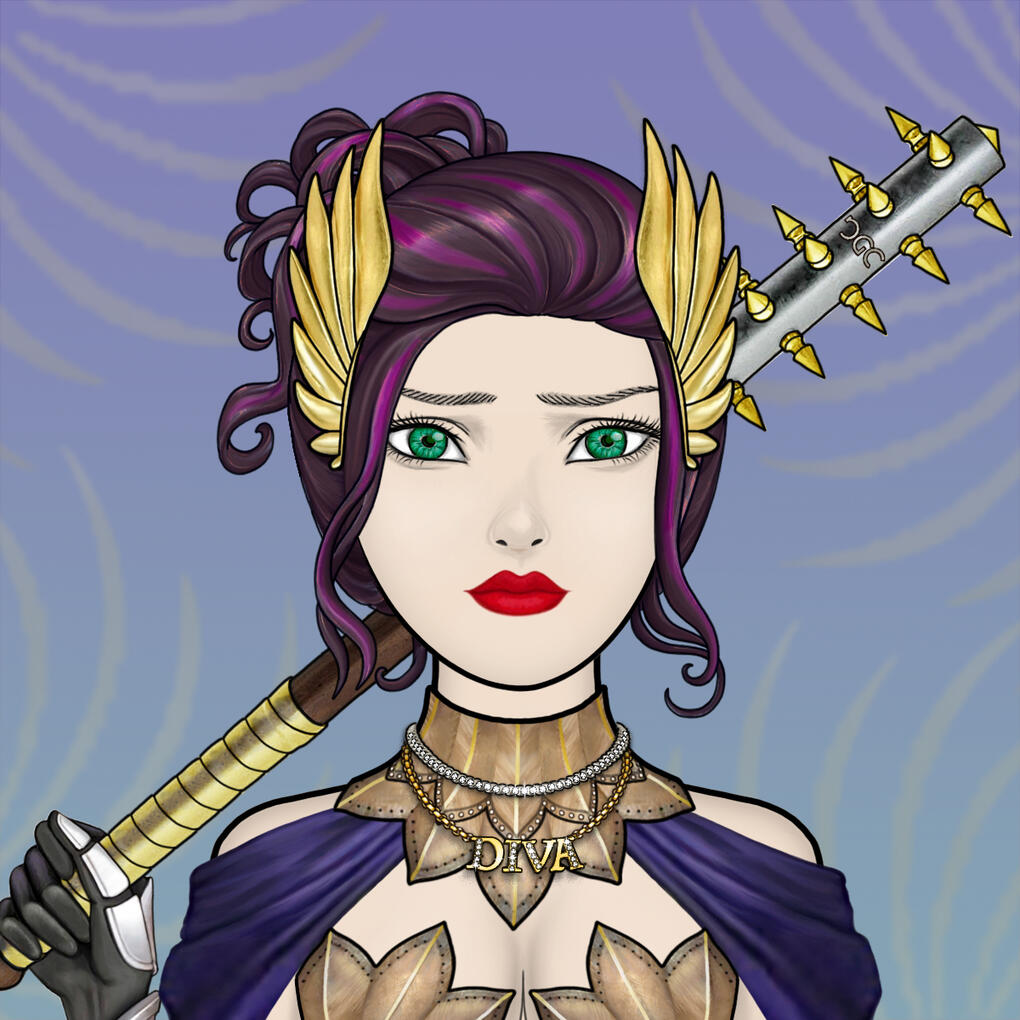 Thank you for looking into our documents!
Our Vision Doc and White Paper are currently under re-construction. Please check back later.

What is an NFT and what can it do?

An NFT (Non-fungible token) is an asset that is unique, one-of-a-kind, and irreplaceable. Using Blockchain technology, the ownership and transactions of NFTs can never be deleted. Therefore, the NFT is a secure asset that has verified authenticity, which can only be owned by 1 person's wallet at any given time.
But how do I own a digital image? You are buying the one-of-a-kind signature assigned to that digital image. Anyone can purchase a bestselling book, but an NFT would be like owning the only copy ever signed by the book’s author.
The benefits of a single NFT are dependent on the creator’s project plan. Some NFTs can unlock a VIP pass to exclusive digital and/or real-life events, while others can function as passports to virtual worlds. Each NFT represents more than just the amazing art that the public sees, and as with any investment, an NFT can be traded or sold by the holder for a profit.
The potential of NFTs is much more than that. It has the power to unite communities, to facilitate change and help improve the world for all people. The NFT community is an untapped source of innovators.
NFT projects such as World of Women, Boss Beauties, Women Rise, Flower Girls, Women and Weapons, Crypto Coven, and a few other women-led teams have seen success and opened doors for all women by creating opportunity in a male-dominated web3 space.
With the focus of empowering women today and ending gender bias, we are utilizing NFTs to connect people, work together on solutions, and make real impact for women and our next generation.

For any questions or collaboration inquiries, feel free to complete the contact form. Please add enough details/context in the "Message" box.
Thank you!